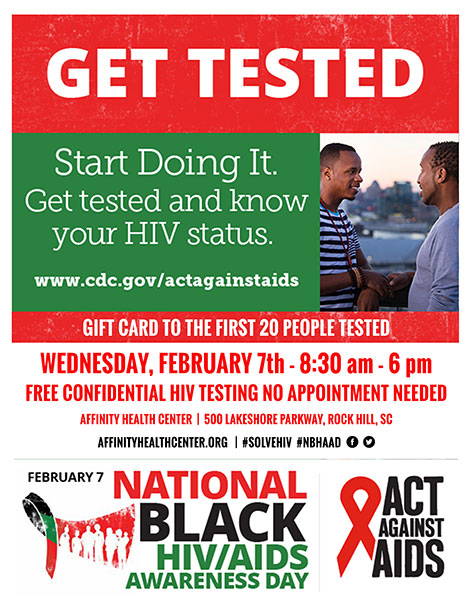 Get tested, know your status. Gift card to the first 20 people tested for HIV at Affinity Health Center on February 7, 2018 during our regular testing hours between 8:30 am to 6:00 pm. This year’s event marks the 18th year for National Black HIV/AIDS Awareness Day (NBHAAD), a national HIV testing and treatment community mobilization initiative targeted at Blacks in the United States and the Diaspora. NBHAAD was founded in 1999 as a national response to the growing HIV and AIDS epidemic in African American communities.

Get Educated about HIV and AIDS;
Get Involved in community prevention efforts;
Get Tested to know their status; and
Get Treated to receive the continuum of care needed to live with HIV/AIDS

Join us on February 7th. Get tested, learn more about HIV, and share what you learned using #SOLVEHIV #NBHAAD18 on social media.